Dolpa, the land of hidden treasure

Dolpo, the remotest and the largest district of Nepal is situated in the mid-westernregion. The district covers nearly six percent land of the country. The vast biodiversity of nature and culture within is the main eminence of the district. Though the variation of diversity can be realized within the short strides, the district has been geographically divided into two regions: Upper and Lower Dolpo. The topography of Upper Dolpo resembles the Tibetan landscape, which is covered mostly by the barren crests with sparse vegetation and pastures.

Upper Dolpo is inhabited by the people, whose culture and religion resemble with Tibetans. The people are Buddhist, even among them, there are two sects: Buddhist and pre-Buddhist. There are several evidences of existence of these sects long back in the region. People belonging to Pre-Buddhist are known as Bonpo, they follow the doctrine of TombaSherap, the founder of the sect. It is accepted that the big clusters of this sect (Bonpo) are found only in Dolpa.

One can scrutinize the traditional Amchi (Traditional doctor) practice, antrism and shamanism. Since precious herbs are found plenty in this region, most of the sick people are treated with locally prepared herbal medicines, in other hand hospitals are out of reach for them. Generally, the life style of the people of this region is very traditional as they are out of reach from the facilities of the advanced world. In this, Amchi plays the role of doctors and suggest various herbal medicine and cure the diseases.

Holy Shey is the sacred highland pilgrimage of Buddhist named within the SheyPhoksundo National Park. The 12 yearly Shey festivals fall in every Dragon year consistent with the Tibetan lunar calendar.  Though the festival is rejoiced there every summer, the twelve yearly celebration of Dragon year is the most important one. According to a legend, 790 years back lama Duptop Singye had explored this sanctified Shey in Dragon year and he instigated the tradition of celebrating this festival. So, the festival is also regarded as the anniversary of the same. As per the Buddhist mythology, one who completes  the course of all the twelve pilgrimages located in different part of this earth will achieve the Nirvana (saintliness) and Shey is the one among them, which is also known as Shelri Ribo Drugda (the Crystal Mountain).  So, the twelve yearly festival of Sheyharbours crucial value to the pilgrims.

It is believed that the holy Crystal Mountain has enormous heavenly power and blessing for the welfare of earthly creatures.

“Where there is a human settlement in the highest elevation”

Dho-Tarap is a Valley where there is a human settlement in the highest elevation.  Dho-Tarap is nearly four days walk from the head quarter 0f Dolpo, Dunai Bazar.  The topography of this valley is beautiful where people grow barely, wheat, buckwheat, etc.  It looks really beautiful at the harvesting time of this stuff.  You can observe the people living on the highest elevation of this earth.

“Kaike” A Typical dialect spoken only in Dolpo

There is cluster of villages named sahartara at the height of 2730 mtrs from the sea level and nearly 6 hours walk from the district headquarter Dunai. There are mostly three villages viz.  Tuppatara, sahartara and Tarakot, where people generally follow Buddhism but the dialect they speak is extraordinary, which is called ‘Kaike’.  The dialect is spoken only in these villages, which is not understood by any other villagers.  Somehow it has the flavor if Kham but is different.  It is believed that the dialect was taught by an Angel.

Main traditional and cultural celebrations are Chheyebu, Rung and Chaitey.  The series of festival begins with chheyebu; which is celebrated as there new year.  It falls in January.  After Chheyebu the festival Rung begins and lasts nearly for a month.  During Rung, people enjoy dancing, singing and performing different activities gathering together.  Eventually, ‘Chaite’ the most important festival begins and it falls in March-April.  The way of celebrating the festival is somehow different and holds an imperative influence in their social life.  However the festival is celebrated by all the villagers they have the rotation among the households to lead the celebration.  The festival is said (ChaiteyBokney) to carry the Chaitey.  Every year two households together manage the celebration for all the villagers.  During the festival that lasts nearly for a month.

The precious pre-Buddhist religion Bon is found to be one of the oldest cultures of the region.  There are nearly ten big monasteries of Bon and several other small ones within the district.  Mostly the monasteries are headed by Tantri Lama Gurus.  The mass of the people following this culture found in Dolpo is the densest in Nepal.

After the introduction of Buddhism, Bon religion and culture beard several dreadful situations, people of this sect were obscured and they hold minority in their kingdom by the 8th century.  Several people ran away from there and settled in different parts of the adjoining regions.  Likewise, some of the people of this cult settled in the highlands of Nepal like in upper region of Dolpo.  Since then Bon religion is found to be continued in this region.

There are several pilgrimage within the district and they hold their own importance according to the places.  Likewise the different monasteries have different values and importance according to their establishments.  Among all the monasteries, Shamling is the oldest one.  It is situated in the village called Vijer at the height of 3850mtrs and it is 6/7 days walk from the district headquarter Dunai.  Beside this, there are many other monasteries that hold significant evidences of the Bon religion and culture.

Since the religion and culture is found to be closely interwoven with natural existences, the people of this cult believe in natural phenomena so they pay their reverence to the natural existences for the welfare of all the creatures.

Among all the monasteries Shamling is the oldest one.  It is situated in the village called Vijer at the height of 3850mtrs and it is 6/7 days walk from the district headquarter Dunai.  Beside this there are many other monasteries that hold significant evidences of the Bon religion and culture.  Now there is a central monastery in the head quarter, Dunai.  Most of the monasteries are Tantric.

The largest national park of Nepal, “SheyPhoksundo National Park” has covered 3555 sq. kilometer land mass of two districtsDolpo and Mugu.  The vast natural and cultural biodiversity is the main feature of the Park.  The Park is full of natural wonders where one can watch rare and endangered species of flora and fauna.  This Park is the habitat of animals like musk deer, blue sheep on top of that the endangered animal the glory of Himalaya, Snow Leopard.  Besides several species of birds and butterflies, also reside inside the park.  Within the vast expanse of the land existence of varied vegetation and the enormous treasure of precious herbal plants are the gift of nature to this region.

The beautiful Lake, Phoksundo is also within the park.  Phoksundo Lake is known as the deepest and second biggest lake of Nepal.  The lake is at the elevation of 3600mtrs. The lake is famous for its turquoise color and the clean water without any living creature.

The lake is surrounded by the stiff-cliffy mountains with pine trees.  There are some holy Bon Gompas, which we can consider as the protector of the natural existence.  Since the Bon religion is closely interwoven with the nature, the people of this sect respect and do not abuse the nature.

Snow Leopard, found in the precipitous mountains and cliffs with sparse vegetation in the Himalayan region is one of the endangered species of cats.  It is the glamour of the Himalayan region.  This fascinating creature is found in several districts of Nepal but the density of its kind is high in Dolpa.  However, it is hard to find big creatures in the Himalayan province; this big cat has become the attraction of this region.

Though it is a carnivorous and seems dangerous due to its physical structure and it is very shy in nature and peace loving.  Since this creature is in the top of the ecosystem, their number in a particular place illustrates the situation of the environment of the expanse.

The big cats depends upon preys like blue sheep, marmots, etc. but when these preys are not available they attack the domestic animals.  Therefore, availability of prey and undisturbed habitat assure the survival of the creatures indicating the healthy environment of the region.

Upper Dolpa, where the density of this creature is high was restricted to foreigners until the few decades ago but now government has allowed them with special permit to inter the region.  The upper Dolpo has many potential areas for the Snow Leopard.

It has been presumed that several precious species of herbs can be available within vast spread land of Dolpo.  Unfortunately, very few species have been recognized till now that is also only for its raw market values.  Among the 529 useful plant species recorded from Dolpa district so far, more than 400 species are medicinal plant such as allium wallichii, Cordycepssinensis, Aconitum, Allium, Arisaema, Berberis, Corydalis, Gentiana, Hippophae, Juniperus, Rhododendron,etc.

Let’s take “Yarsagumpo” the latest natural cash crop which is found naturally grown.  In fact this is the Living Gold gifted by nature.  When the warm or larva (according to some experimenters it is supposed to be the larva of Tiger Moth) hibernates in the snow after then a kind of mushroom is grown from it, when the snow melts the creature with mushroom is seen along the pastures remaining as half animal and half plant.  When it is dragged out from the earth it is alive but just for a short time.  When it is gently brushed, it shines yellowish like gold therefore; it is called the Living gold.

When the snow on the pastures start to melt, the hope of the harvesters start to bloom. Everybody wishes to have this living Gold, the easy source of since the people realized the value of this stuff.  In these days this strange species has become the easiest source of income for most of the families and the huge money making business for the traders.  Though it is so popular, people are still unknown about the ultimate utility and the real value of this strange species.

Dolpo, the remotest and the largest district of Nepal is situated in the mid-western region. The district covers nearly six percent land of the country. The vast biodiversity of nature and culture within is the main eminence of the district. Though the variation of diversity can be realized within the short strides, the district has been geographically divided into two regions: Upper and Lower Dolpo. The topography of Upper Dolpo resembles the Tibetan landscape, which is covered mostly by the barren crests with sparse vegetation and pastures.

Fly from Jhuphal to Nepalgunj, and from Nepalgunj to to Kathmandu.

Included in the Package

Not in the Package

Ask us if you have questions

What is the difficulty level?

It is not so difficult but since this trekking is long, it is strenuous. 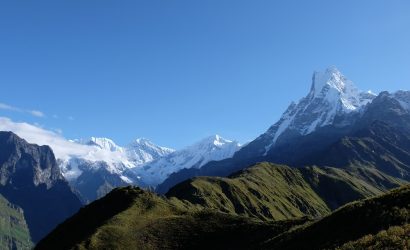 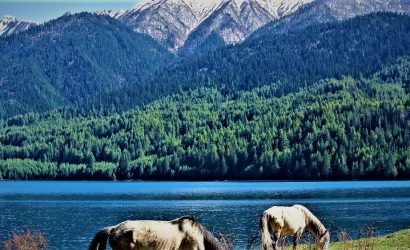 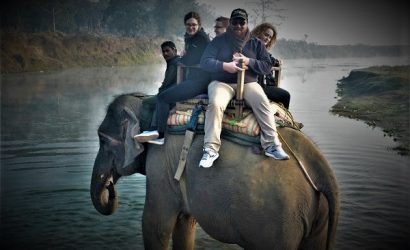 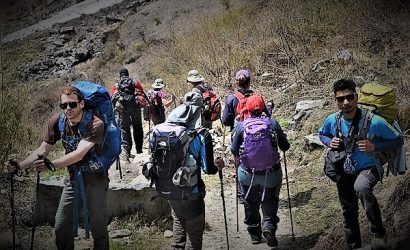 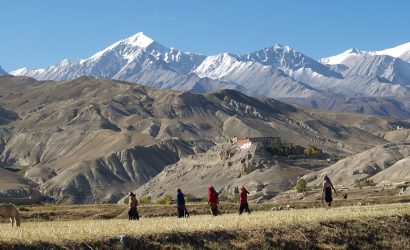 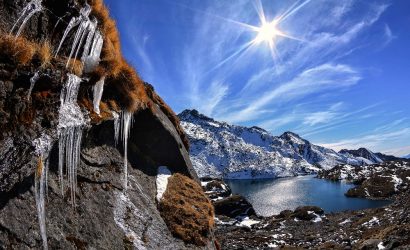